Let’s talk about mental health. Last weekend, the news broke that Rick Genest, also known as Zombie Boy, passed away at the age of 32. At the time, there was no official report as to what happened and how he died. However, Lady Gaga took it to Twitter to (supposedly) shed light on the event while paying tribute to Genest, since he starred in the video for her song Born This Way. This is what she tweeted. 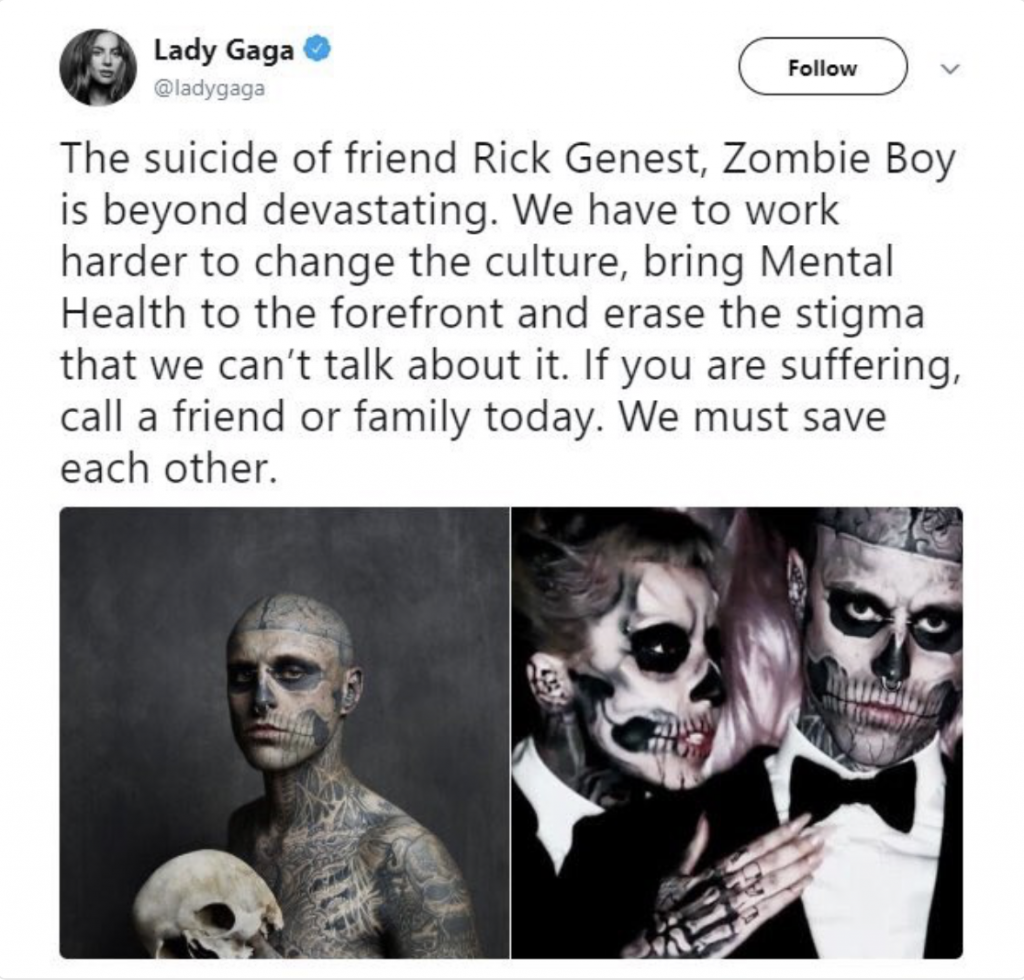 That didn’t go well for her, since Genest’s family and manager came forward and said his death was accidental and people jumping to conclusions, like the one that he committed suicide, wasn’t helping anyone. Which is true. People should wait for facts and hard evidence before jumping to conclusions. Especially when it comes to suicide. Statistics show that every time a celebrity commits suicide, the suicide rate among the general public rises.

This brings me to my point. With all that being said, Lady Gaga’s original tweet (now deleted) is still important. I agree with her. We SHOULD work harder, we SHOULD take mental health seriously and bring it to the forefront, and we SHOULD talk about it. The problem I have with her statement is I don’t think Lady Gaga herself believes in this. As well as others on the Left who, ironically enough, keep preaching the I Was Born This Way philosophy. We SHOULD think and talk about solutions and how to actually help people who have problems. Let’s talk about it! Anytime you’re ready!

Every time someone begins the conversation about people with mental disorders and people who have obvious mental struggles and issues, we get the same old screeching, “Leave me alone, I was born this way and you need to accept me the way I am!” Then someone actually commits suicide, and those same people who were screaming BORN THIS WAY a minute ago are now wondering what happened, why did they do it, and why did noone do anything. Well hellooo, five minutes ago we just told you let’s talk about the issue and think of a solution.

So which one is it? What does the Left want from us. Do you actually want to talk about it and find solutions and maybe give guidance to people who have obvious problems, or do you just want us to entertain the idea that this is who you are and you are just born this way and everyone should just accept you. Same goes for “We need to bring awareness and stop the stigma.” Honey, there is no stigma around people with problems. People are very much aware of mental health issues and want to talk about it. Let’s talk about it. Let’s talk about the fact that 40% of people with gender dysphoria end up committing suicide and that number doesn’t change pre-op to post-op. Let’s even talk about Rick Genest. While it turned out that he didn’t actually kill himself, it is still reported and obvious that he had some issues that he was trying to overcome. That is why after Lady Gaga spread the LITERALLY fake news about him committing suicide, noone was shocked and it sounded plausible. People didn’t think twice about the guy having mental health issues and didn’t even question his apparent suicide.

What you need to do if you really want to help people with mental struggles or straight up illnesses is you need to stop entertaining their delusions and their struggles. You need to sit them down and actually get them help. Imagine you had a relative, say your grandmother, and grandma thought that the curtains were talking to her. What would you do? You got two options. Option A is “Grandma, noone is talking to you, you need help, let’s get you help.” Option B is “Sure thing, grandma, how about I go buy you more curtains. That way, you can have more company over here!” Which one of these do you think is more cruel? I know I’m giving a rather extreme example but I’m only doing so in order for you can get the gist.

Stop with the born this way nonsense. Stop entertaining people’s delusions, problems, and illnesses. You’re not helping anyone. Get them help. Real help.

I’ll actually go there and say that Lady Gaga and that kind of mentality of the Left is part of the problem. Next time someone brings up somebody who is clearly having some mental issue, she and people like her are going to be the first ones to jump up and start screeching the same old “Leave them alone, this is who they are, they are born this way and you should just accept them for that! If you don’t, you’re a bigot who doesn’t care about them.” Then they become part of the statistic, the statistic that was not taken care of by professionals. Right after that, we’ll get the same old “We need to bring more awareness to mental health. We’re not doing enough for each other.” Honey, we ARE aware, but it seems like you and people like you are far from it.

Why Do We Keep Devaluing Life?