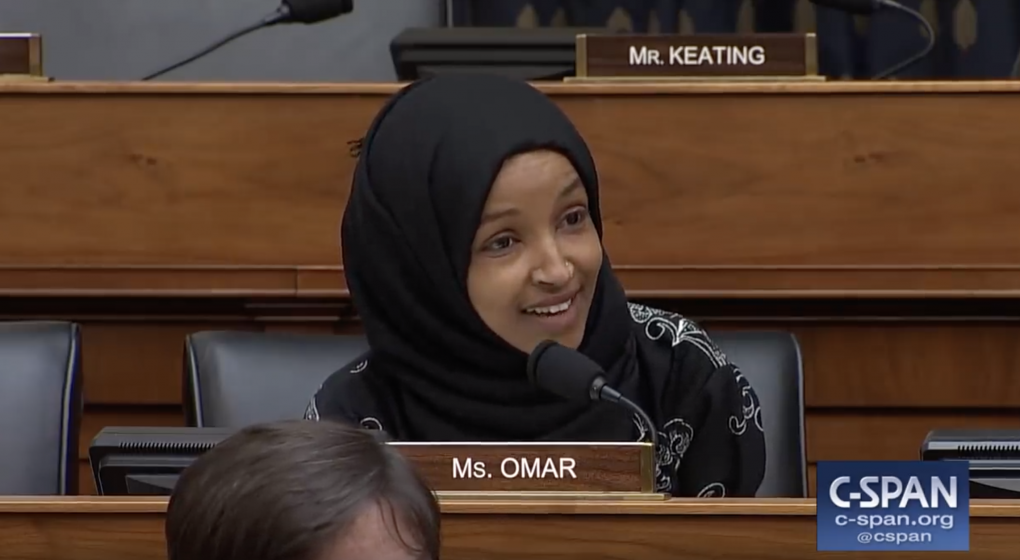 OMAR: “Yes or no, do you think that massacre was a fabulous achievement that happened under our watch?”

ABRAMS: “That is a ridiculous question.”

On Valentine’s Day, let’s take a look at the lovely freshman representative from Minnesota’s 5th District, Ilhan Omar. Omar, who has a standing history of anti-Semitic attitude including the most recent show she put up on Twitter over the weekend, is still on the House Foreign Affairs Committee. Yesterday we all had the pleasure of being witness to her “questioning” of Elliott Abrams, Secretary of State Mike Pompeo’s newly appointed Special Envoy to Venezuela. Thankfully, the video went viral so everyone was able to see the unhinged and disgusting attack from Rep. Omar directed at Abrams, whom she also erroneously called “Adams.”

Watch the video for yourselves. Such a haughty, vile demeanor dressed up as “assertiveness”, like there she is, finally, the woman who will speak truth to power, she will stand up to those evil white American men who kill innocents abroad just for fun and then call it “fabulous.” She is so brave, so righteous. And there’s such delight in her attempt to humiliate Elliott Abrams, member of the US Holocaust Memorial Council and a man who has been championing freedom and human rights his entire life.

No wonder her behavior got endorsed by no other than former Ku Klux Klan Grand Wizard David Duke. Such an accomplished brave woman!

This is your representative, Minnesota. This is the person who is supposed to speak for you, to represent you and your district before the country and the world. Think about that.